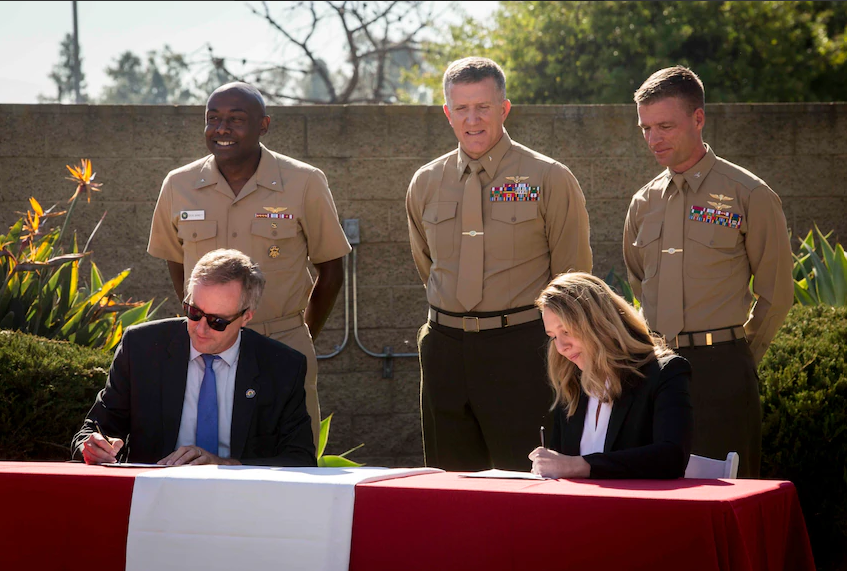 SAN DIEGO - The Department of the Navy (DON) and the California Energy Commission (CEC) signed a memorandum of understanding (MOU) Dec. 1 that will help the Navy, the Marine Corps and the state collaborate on energy and water-related projects at DON installations.

“This partnership is critical to the DON’s responsibility to provide assured energy to sailors and Marines,” said Meredith Berger, performing the duties of the Under Secretary of the Navy & Assistant Secretary of the Navy for Energy, Installations and Environment. “The Navy and Marine Corps need reliable power ashore to ensure we are able to train, man, equip, then deploy and employ our personnel. By signing this MOU with the state of California we can work hand-in-hand to be good stewards of the environment and improve the resiliency, reliability and efficiency of our DON installations throughout the state.”

“The partnership between the California Energy Commission, the Navy and the Marines will help us advance a clean energy future by increasing energy efficiency measures and expanding renewable energy resources on bases and installations,” said Hochschild. “This mutual effort advances readiness, while reducing pollution and protecting our planet from the destructive effects of climate change.”

The DON is transforming its energy and water use by developing resilient energy resources to bolster reliable and efficient energy security measures. CEC grant programs, such as the Electric Program Investment Charge (EPIC) program, have provided more than $50 million in research and development funding to projects directly supporting Department of Defense military bases in the state.

“With the CEC, the DON is pursuing innovative energy efforts to reduce our vulnerability and keep our installations resilient and secure,” said Berger. “This innovative approach is good for our bases by giving them greater energy resilience, good for California as it ramps up its carbon-free electric initiatives, and good for our nation as we move toward a net zero goal.”

Past and current joint projects between the DON and the CEC include powering critical DON facilities with micro-grids, renewable energy and battery storage systems that increases electric grid stability for both DON installations and their local communities. The DON is looking to address climate concerns by reducing greenhouse gas emissions by modernizing DON electrification infrastructure.

The secretary’s office serves the DON and the nation by enhancing combat capabilities for the warfighter and providing greater energy security for DON installations. It is is charged with overseeing partnerships that will increase DON’s climate change resiliency and protection of the occupational health of the military and civilian personnel.

This article was originally published by the U.S Navy’s Office of Information.