Buy Low, Sell High: How Batteries are Cleaning Up the Grid

Battery storage is on the rise in California, increasing electric reliability while reducing electricity costs and greenhouse gas emissions.

California added 1,400 megawatts (MW) of grid-scale batteries to the electric grid in 2021. Good news for a grid that increasingly relies on renewable and zero-carbon sources. By capturing renewable energy when it is plentiful to use when it is scarce, batteries enable clean energy to continue powering the grid as the sun sets, reducing GHG emissions by offsetting use of natural gas peaker plants.

On July 16, 2021, California hit a major milestone when, for five minutes, grid-connected batteries provided more than 1,000 MW of electric power for the first time ever — enough electricity to power 750,000 — 1,000,000 California homes. The milestone was double that of 501 MW set just three and a half months before.

The boom in storage does not appear to be slowing. Between that record day and the end of August, it increased another 41 percent to 1,420 MW. The CEC projects that 49,000 MW of battery storage will be needed to meet the clean energy goals of Senate Bill 100, which requires California’s electricity system to be carbon free by 2045. To achieve this goal, California will need to sustain this rapid buildout for years to come.

Figure 1. Maximum 5-minute battery output to date. Maximum output doubled from 500 to 1,000 MW over just three and a half months and continues to grow.

The secret to batteries’ potential: buy low, sell high. Batteries can make money so long as the difference between prices is big enough to make up for energy losses in storage. And what makes money for the battery industry also benefits the planet. The price of electricity reflects the energy — typically natural gas — required to produce it, so electricity is inexpensive when it is clean and expensive when it is GHG-intensive. Batteries can buy power midday when electricity is cheaper because clean solar is plentiful, then sell power back to the grid when power is in demand, solar is fading, and prices are high. For example, the July 16 record was set at 7:45 p.m., within minutes of the day’s peak in net demand.

In essence, every dollar saved reduces GHG emissions. The figure below shows the total energy losses from batteries (orange, bottom), and the total value** they have generated in the energy market (blue, top) to date. Since April 2018, grid-scale batteries have incurred more than 160 gigawatt-hours (GWh) in losses, yet they have created $11.5 million in value and associated GHG emissions. 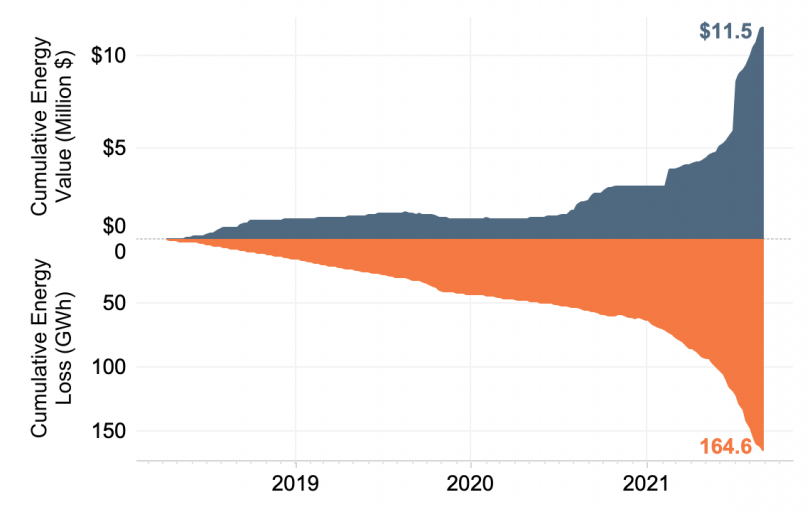 Batteries can also moderate the extremes in daily price swings. During the day, they increase demand for clean electricity, keeping prices above zero. They transform into generation resources later in the day when prices peak, increasing supply and helping to keep prices from spiking in California’s electricity markets. The figure below shows the daily maximum and minimum system marginal energy cost in July and August from 2019 to 2021, with lines showing the average. While electricity prices are influenced by factors including demand, natural gas prices, and hydropower availability, the trend illustrates the impact of batteries. The decrease in the maximum price, about $100/MWh, is greater than the increase in the minimum price, about $15/MWh.

Figure 3. Batteries participating in the energy market have the effect of moderating extreme high and low prices. Energy price values over $500/MWh are not shown for clarity. 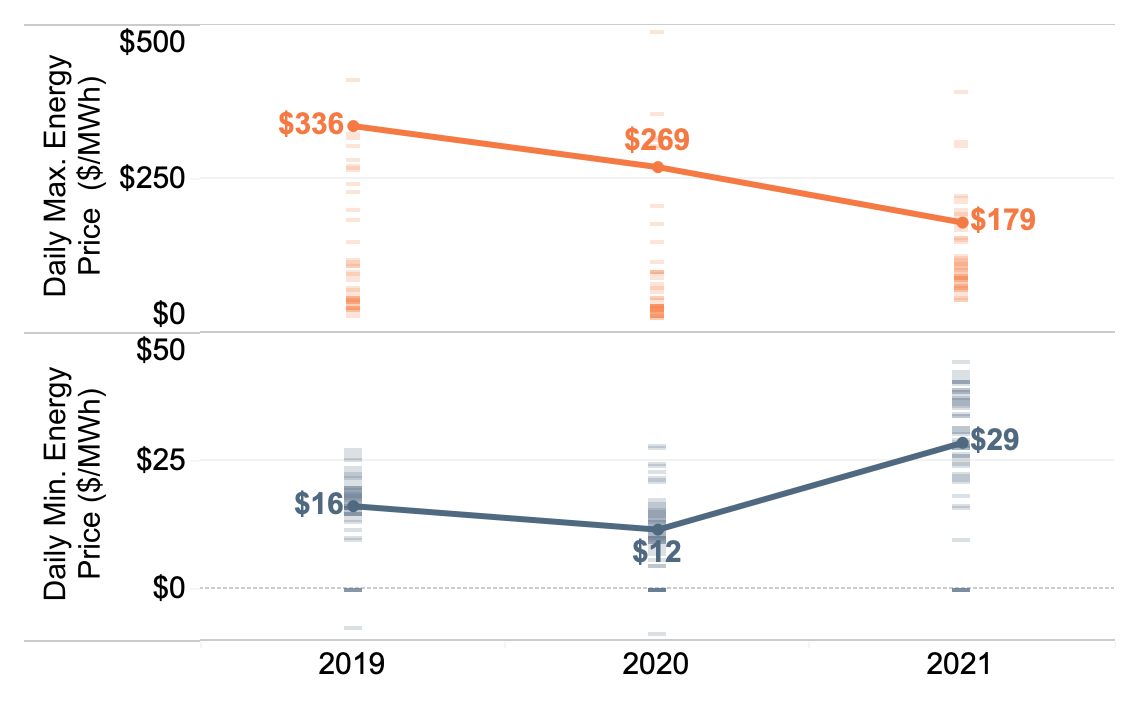 *Battery capacity additions are the limited energy storage resources on the California ISO master file on the first day of each month.

**Energy value is the product of battery charge and discharge amounts in MWh and the California ISO system marginal energy cost in the five-minute real-time market. In other words, it is the dollar value of the energy exported to the grid minus the cost of the energy used to charge. This metric is likely conservative because it does not include local benefits associated with congestion and transmission losses.