As summer peaks, demand for air conditioning and space cooling is up, offsetting decreases in other loads during peak hours.

As summer peaks, demand for air conditioning and space cooling is up, offsetting decreases in other loads during peak hours. Weekday demand for cooling – air conditioning and related uses – is up 9 percent during Stage 2 of California’s stay-at-home order compared to the corresponding period of 2019, as Californians stay home during the summer heat. In contrast, noncooling demand is down 5 percent as other economic activity remains scaled back. The profiles of cooling and noncooling loads are different, so understanding how each is changing independently is key to understanding how overall summer electricity use is changing under the stay-at-home order.

Figure 1 (top) shows the estimated cooling load surging during the afternoon and evening for the average daily composite temperature (71.5ºF) during Stage 2 of the stay-at-home order relative to normal conditions. In contrast, noncooling consumption is down across all waking hours (middle). Under these conditions, overall consumption drops about 3 percent (19 gigawatt-hours [GWh]), but peak load remains within half a percentage point of the normal expected level (bottom). On the hottest weekday of Stage 2 so far (79ºF), cooling loads are expected to pull peak loads about 3.9 percent (1.7 GW) above normal levels, even as total electricity consumption is down 1 percent (8.8 GWh). 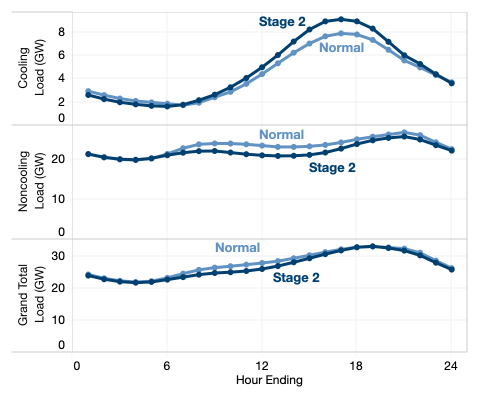 Source: California Independent System Operator (California ISO) Open Access Same-time Information System (OASIS). A linear regression model of electricity load as a function of cooling degree days (CDD, defined as degrees above 65ºF) is run for each hour of the day for Stage 2 of the stay-at-home order and the corresponding period in 2019. Temperatures used to compute CDD are composite weighted averages of California weather station daily average air temperatures. “Cooling loads” are defined as electric demand attributable to an increase in CDD, which may include some loads that are not strictly space cooling, such as refrigeration.

Following a gradual rebound since May, the reduction is now smaller than at any time since the first weeks of April, when industrial customers were just beginning to cut back or shut down operations. While the consumption appears to be returning quickly to 2019 levels, the pattern across previous months shows significant fluctuations, which are likely to continue before leveling out. 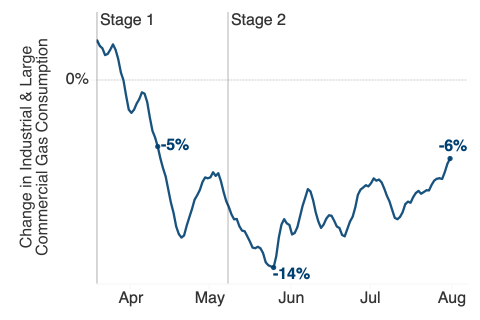 Source: PG&E Pipe Ranger. Dates in 2020 have been matched with the corresponding week and weekday in 2019 to account for weekly patterns in demand. The two-week rolling average smooths otherwise volatile year-over-year differences.

One California refinery announced a permanent closure on July 31, while others remain at varying degrees of reduced operating levels. 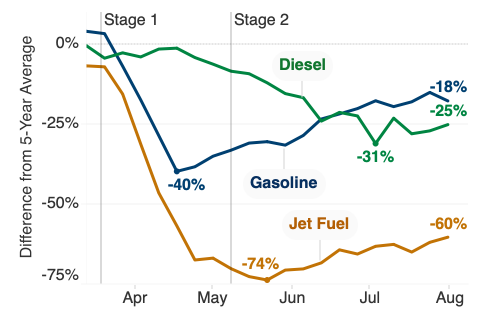 Reduced demand for transportation since the stay-at-home order contributed to depressed gasoline and diesel prices, mirroring net production. The decline in demand and ensuing price war between major oil-producing countries (which predated California’s stay-at-home order) led to decreases in prices of crude oil and refined fuels, as shown in Figure 4. Crude oil dropped earliest, reaching a maximum year-over-year decrease of $1.44 per gallon in April before bouncing back to around $0.40 below in recent weeks.

Refined fuel prices respond both to crude oil prices and changes in demand for the specific fuel. Following the price of crude, diesel prices dropped to nearly a dollar per gallon below 2019 prices. Gasoline prices fell further, to a minimum of $1.37 below around the beginning of May because of decrease in demand for personal vehicle travel. On April 3, California’s average retail price for regular grade gasoline dropped below $3 per gallon for the first time since August 2017. However, the price of gasoline has rebounded more than the price of diesel relative to last year as demand for personal vehicle travel picked up in Stage 2 of the stay-at-home order.

Figure 4: Difference in Fuel Prices From 2019 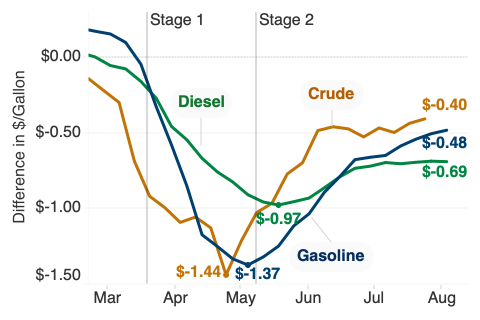 Source: Energy Information Administration, Weekly Retail Gasoline and Diesel Prices, California. Prices are shown as differences from prices during the same week of 2019 to account for seasonal variations in fuel prices. Crude oil price is shown as the average of Brent and West Texas Intermediate Crude.