SACRAMENTO – The California Energy Commission (CEC) approved a plan today that will invest up to $115 million to significantly increase the number of fueling stations in the state that support hydrogen fuel cell electric vehicles (FCEVs). The funding nearly doubles the state’s investments to date and will help California nearly achieve its goal to deploy 200 public hydrogen fueling stations.

The plan also supports Governor Gavin Newsom’s executive order phasing out the sale of new gasoline-powered passenger vehicles by 2035 by providing essential infrastructure to meet the fueling needs of the increasing number of zero-emission vehicles (ZEV) anticipated on the road in the next decade. While battery electric vehicles (BEV) are the most common ZEV in the state, more than 8,000 FCEVs have also been leased or sold.

Under the plan, up to 111 new hydrogen fueling stations will be built in the state by 2027, including many designed for multi-use by passenger vehicles, trucks and buses. Total project funding is subject to annual approval of both the state budget and allocations from the CEC. 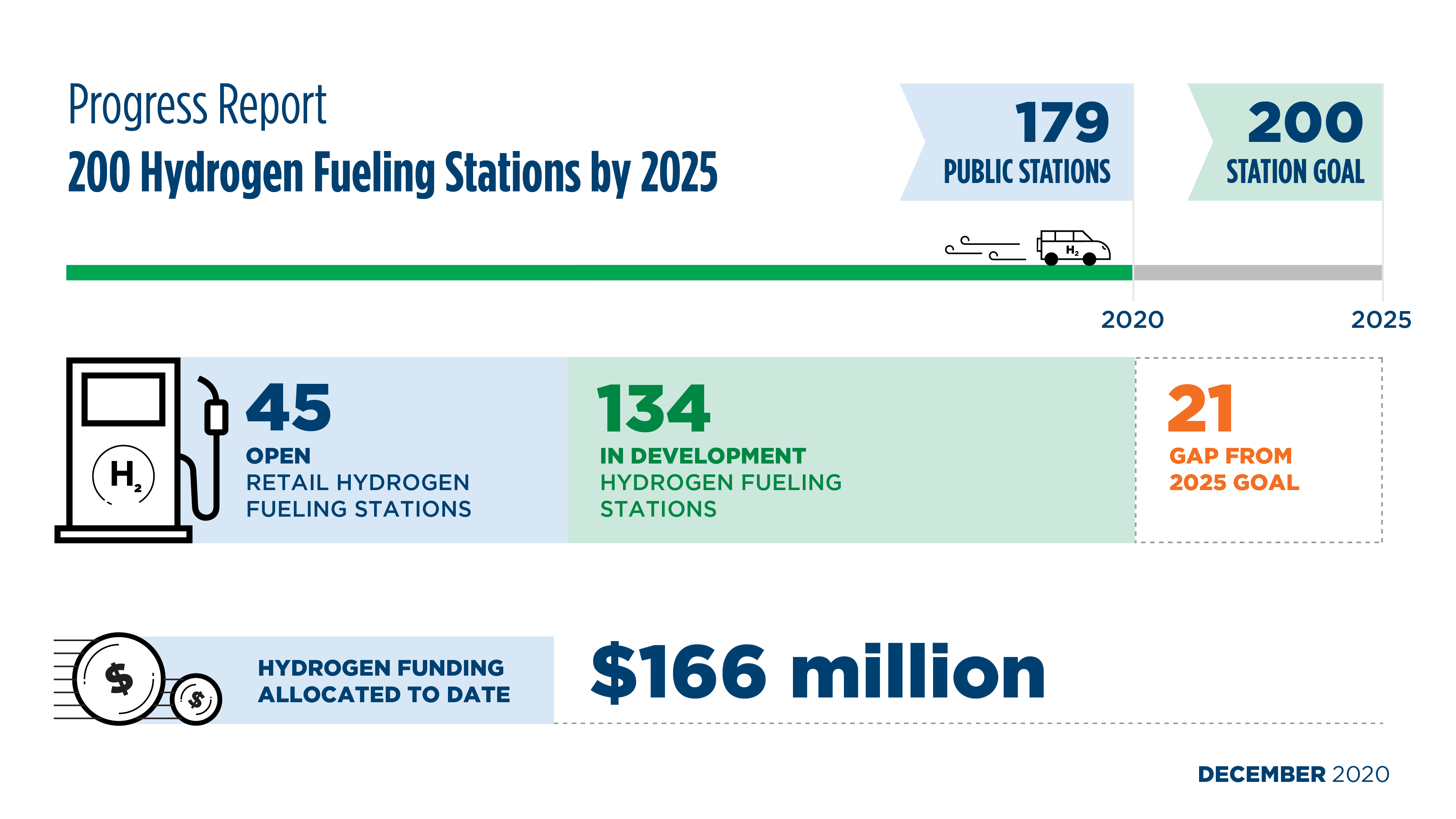 To date, the CEC has funded 45 open retail hydrogen stations with an additional 16 under construction. Altogether with today’s approved plan, there could be up to 179 stations in the state, including seven privately funded stations.

During today’s business meeting, commissioners awarded three grants totaling nearly $25 million for the installation of the first 30 stations under the plan. More than half of the stations approved today will be built in or near disadvantaged communities.

“We are proud to support these important infrastructure projects to ensure fueling is available as more Californians choose clean cars and trucks,” said CEC Commissioner Patty Monahan. “As the zero-emission vehicle market grows, drivers need to feel confident that they can refuel their vehicles, whether they are downtown or driving across the state.”

First Element Fuel also received $5 million from the Volkswagen (VW) Environmental Mitigation Trust, a nationwide program that provides funding for states to mitigate the excess NOx emissions caused by VW’s use of illegal emissions testing defeat devices in their diesel vehicles. The additional funds are designed to accelerate the development of additional hydrogen fueling stations in California.

Today’s grants were awarded through the CEC’s Clean Transportation Program, which invests more than $100 million annually to support transportation-related innovations and accelerate the development and deployment of advanced transportation and fuel technologies. About $20 million from the program – the maximum allowable under state law – is invested each year to support an initial network of at least 100 public hydrogen stations.

Created by Assembly Bill 118 (Núñez, 2007) and reauthorized by Assembly Bill 8 (Perea, 2013), the Clean Transportation Program is one of the first transportation-focused funding efforts established to help advance the state’s climate change policies. Now in its 12th year, the program has provided nearly $900 million to projects across the state covering a broad spectrum of alternative fuels and technologies.

According to the California Air Resources Board, the transportation sector is responsible for more than half of all of the state’s carbon pollution, 80 percent of smog-forming pollution and 95 percent of toxic diesel emissions

More details on California's hydrogen investments are available in the 2020-2023 Investment Plan Update for the Clean Transportation Program.

How much has been spent on hydrogen fueling infrastructure in the state?
Since 2009, $125 million has been invested through the Clean Transportation Program to install or upgrade 62 publicly available hydrogen stations capable of light-duty vehicle fueling. The plan approved today provides up to an additional $115 million. These investments complement the CEC’s hydrogen fueling investments in medium and heavy-duty vehicles. The Clean Transportation Program also supports private hydrogen infrastructure investments for trucks and buses.

How many hydrogen stations will this grant fund?
The grants awarded today will see 30 stations installed within the next 30 months with the possibility of up to 84 more being built in the future (subject to state budget appropriations and annual approval of the Clean Transportation Program Investment Plan).

Where will the stations be located?
They will be located throughout the state with more than half located in or within a 15-minute drive of a community identified as disadvantaged by CalEnviroScreen. Almost all stations will be located at existing gasoline stations.

When will the stations approved today open?
It is expected that station developers will obtain the necessary approvals from their jurisdictional authorities within 18 months of the CEC approving the station under the agreement, and that stations will open within 30 months.

How many hydrogen stations are either under construction or are being built in California?
Thirty were approved today, 45 have achieved open retail status and are operating, and 16 are in various stages of planning or construction.

FirstElement and Equilon are procuring 100% renewable hydrogen for their existing 28 open retail stations.