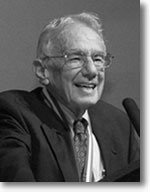 Commissioner Rosenfeld was presiding member of the Research, Development and Demonstration Committee and the Dynamic Pricing Committee (Ad Hoc Committee); and was the second member of the Energy Efficiency Committee.

Art Rosenfeld received his Ph.D. in Physics in 1954 at the University of Chicago under Nobel Laureate Enrico Fermi, and then joined the Department of Physics at the University of California at Berkeley. There he joined, and eventually oversaw, the Nobel prize-winning particle physics group of Luis Alvarez at Lawrence Berkeley National Laboratory (LBNL) until 1974. At that time, he changed his research focus to the efficient use of energy, formed the Center for Building Science at Lawrence Berkeley National Laboratory, and led it until 1994.

Dr. Rosenfeld is the co-founder of the American Council for an Energy Efficiency Economy (ACEEE), and the University of California's Institute for Energy and the Environment (CIEE).

He is the author or co-author of nearly 400 refereed publications, received the Szilard Award for Physics in the Public Interest in 1986, the Carnot Award for Energy Efficiency from the U.S. Department of Energy in 1993 and the Berkeley Citation in 2001 from the University of California. He is most proud to have received in 2006 the Enrico Fermi Award, the oldest and one of the most prestigious science and technology awards given by the U.S. Government. He received this from the Energy Secretary Samuel W. Bodman, on behalf of the President of the United States, for a lifetime of achievement ranging from pioneering scientific discoveries in experimental nuclear and particle physics to innovations in science, technology, and public policy for energy conservation that continue to benefit humanity. This award recognizes scientists of international stature for their lifetimes of exceptional achievement in the development, use, control, or production of energy. This award is particularly important to Dr. Rosenfeld because, as mentioned, he was Enrico Fermi's last graduate student.

In June 2011 in St. Petersburg, Russia, President Medvedev presented Dr. Rosenfeld with the prestigious Global Energy Prize in recognition of his lifetime of achievement in energy efficiency.

In February 2013, Dr. Rosenfeld received a National Medal of Technology and Innovation from President Obama for his development of energy efficient building technologies as well as related building standards and policies. See footage of the award ceremony from February 1, 2013 on this Video (Dr. Rosenfeld is introduced at 24:45).

In 2008, in London, the Economist magazine awarded him Innovator of the Year in the field of Energy and Environment.

In 2010 he was voted into the National Academy of Engineering. https://www.nae.edu/28650/Dr-Arthur-H-Rosenfeld