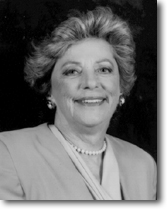 The five members of the Commission are appointed by the Governor to staggered five-year terms and require Senate Rules Committee Approval. By law, the five members of the Commission have professional training in specific areas -- engineering and physical science, environmental protection, economics, law, and one commissioner from the public-at-large.

Mrs. Rakow was the Presiding Member of Intergovernmental Relations Committee; Research, Development and Demonstration Report and Program Committee; and Siting and Regulatory Procedures Committee. She was Second Member of the Budget and Management Committee.

She is on the Board of Directors for the Pacific Environment and Resources Center, a non-profit organization. Mrs. Rakow was the State Director for Governor Pete Wilson's California offices during his six-year tenure in the United States Senator and was closely involved in Wilson's efforts to promote energy efficiency and the use of alternative fuels.

Mrs. Rakow has been associated with education since 1969 when she was elected to two consecutive four-year terms on the Ross School District Board of Trustees. She held the positions of Board Chair, Vice Chair and Legislative Chair. In 1971, she was appointed to a five-year term on the California State Scholarship and Loan Commission.

A graduate of Dominican College in San Rafael, California, Mrs. Rakow received a Bachelor of Science in history and education. She has a California Life Teaching Credential in Elementary Education.