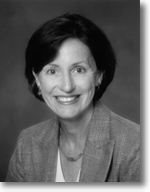 Jackalyne Pfannenstiel was appointed to the California Energy Commission on April 20, 2004, by Governor Arnold Schwarzenegger. She was named Chairman in June 2006.

Ms. Pfannenstiel, of Piedmont, has been an energy policy and strategy advisor from 2001 to 2004. Previously, she was vice president for planning and strategy with PG&E Corporation. She joined PG&E in 1980 and held positions in the areas of rates, regulation, and planning. Her earlier work was with the California Public Utilities Commission where she served as a senior economist from 1978 until 1980. Before moving to California, Ms. Pfannenstiel was an economist with the Connecticut Public Utilities Commission.

Ms. Pfannenstiel holds a master degree in economics from the University of Hartford and an undergraduate degree, also in economics, from Clark University.