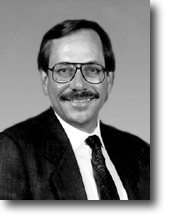 Former Chairman Charles R. Imbrecht (R-Ventura) was appointed in 1983 by Governor George Deukmejian as Chairman of the California Energy Commission and was reappointed and unanimously reconfirmed by the Senate in January 1988. In February 1993, Governor Pete Wilson reappointed him to the Energy Commission for a third, five-year term and to his sixth consecutive term as Chairman. Mr. Imbrecht resigned his position because of personal obligations in January 1997.

During his tenure at the Energy Commission, Mr. Imbrecht filled the position that represents the field of law.

Mr. Imbrecht was the Presiding Member of the Commission's Budget and Management Committee, Legislative Committee and 1994 Electricity Report Standing Committee; and Second Member of the Intergovernmental Relations Committee, and the Research, Demonstration and Development Report and Program Committee.

In January 1990, Mr. Imbrecht was appointed Co-chair of the U.S. Alternative Fuels Council by the U.S. Department of Energy. In March 1991, he was appointed by the U.S. Environmental Protection Agency to the National Advisory Council on the 1990 Federal Clean Air Act. He was State Liaison Officer to the Nuclear Regulatory Commission. He was a member of numerous boards including the National Research Council's Energy Engineering Board; the 16-state Western Interstate Energy Board, the Board of Directors of the American Energy Assurance Council; the California Alternative Energy Source Financing Authority; the Board of Directors of the National Association of State Energy Officials; the Electric Power Research Institute's (EPRI) National Advisory Council; and the Governor's Council on Growth Management. In November 1992, he was the first American to receive the Augustine Mouchot Prize from the European Solar Association.

A native of Ventura County, in 1976, Mr. Imbrecht was elected to the California Legislature at the age of 27, and served until his appointment to the Energy Commission. In 1981, he was named as one of the "Five Outstanding Young Men of California" by the Junior Chamber of Commerce, and in 1982, he was named by the Los Angeles Herald Examiner as one of the "Five Most Effective Legislators" in both houses of the State Legislature.

Mr. Imbrecht held a Bachelor of Arts Degree in political science from Occidental College and a Juris Doctorate from Loyola University Law School. He was a Business Editor for the Loyola Law Review, Captain of the National Moot Court Team and was a published author on criminal law.