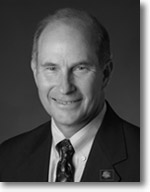 Jeffrey Byron, of Los Altos, was appointed to the California Energy Commission by Governor Arnold Schwarzenegger in June 2006. The five members of the Energy Commission are appointed by the Governor to staggered five-year terms and require Senate confirmation. By law, four of the five members of the Energy Commission are required to have professional training in specific areas - engineering or physics, environmental protection, economics, and law. One commissioner is appointed to represent the public-at-large. Commissioner Byron fills the public-at-large position with over 30 years of experience in the electric power industry and over 10 years of service assisting customers in meeting their energy needs.

Prior to his appointment, Commissioner Byron served as president of Byron Consulting Group, developing strategic energy solutions for mid to large-sized firms since 2002. Commissioner Byron served as Co-Chair of the Silicon Valley Leadership Council's Energy Committee and managed an energy efficiency program to reduce energy use and carbon emissions among businesses and other organizations on behalf of the Silicon Valley Leadership Group and Sustainable Silicon Valley. Previously, he developed combined heat and power projects for Calpine C*Power from 2000 to 2001, and was Energy Director for Oracle Corporation from 1996 to 2000. Commissioner Byron served at the Electric Power Research Institute from 1985 to 1995 in a variety of capacities, including commercialization director and executive technical advisor.

Commissioner Byron received a Bachelor and a Master of Science degree from Stanford University.