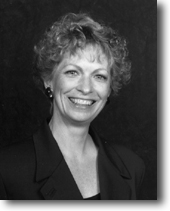 Jananne Sharpless was appointed to the California Energy Commission in January 1994 and was a member through 1999.

The five members of the Commission are appointed by the Governor to staggered five-year terms and require Senate Rules Committee approval. By law, the five members of the Commission have professional training and background in specific areas -- engineering and physical science, environmental protection, economics, law and one commissioner from the public at large. Ms. Sharpless filled the environmentalist position.

She graduated from the University of California, Davis, with a B.A. Degree in Political Science.